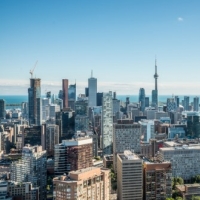 Toronto real estate is slated for another boom.

Thanks to the city’s thriving technology sector, Ron Sally believes real estate—and condos in particular—are going to be the hottest commodity in town.

“Our tech industry in Toronto is about to explode,” said broker of record and owner of REMAX Millennium Real Estate. “It’s been slowly climbing up the ranks; it hasn’t reached its peak yet but it’s about to come out into the open. It’s currently ranked number two in North America and number four in the world.”

“As of 2017, the ranking is number 11 globally for the financial sector,” he continued. “What this means is that in the world, Toronto is the eighth-most liveable city and our job sector is going to grow, as well, in the next few years. Toronto’s condo market is undervalued, so whoever can get a piece of Toronto real estate should do it while it’s still available.”

“Our transportation system is being improved—the city is changing implementation,” said Sally. “A lot of changes are going to turn this into a global city. Right now everyone knows where Toronto is. We had 28,900 new tech jobs created in Toronto, and that’s more than the San Francisco Bay Area, Seattle and Washington D.C. combined.”

Indeed, Microsoft, Uber, Shopify, Airbnb and Google Sidewalk Labs are all setting up shop in Canada’s largest city and economic heartbeat. Coupled with the fact that new tech sector jobs will be created in the years ahead, and the fact that supply already lags well behind demand, Toronto condo valuations are on pace to surge.

“Downtown on King St., condos are selling for $1,500 to $1,600 per square foot; Pemberton is also selling one at $1,200 per square foot,” said Sally. “Things are slowly changing and those who see the big jump coming in the next two or three years understand it’s the same jump we had in 2014 and 2016. We have one million immigrants entering Canada in the next three years.”

According to Matt Smith, a broker with Engel & Völkers in Yorkville who specializes in the luxury market, the city’s thriving tech sector has been fuelling demand for high-end homes.

“A new trend is on the horizon that will continue to push Toronto’s housing market and its luxury segment, and it’s the impending tech boom,” said Smith. “In the last five years, Toronto has created 82,000 tech jobs, more than Silicon Valley and more than any other city in North America.”